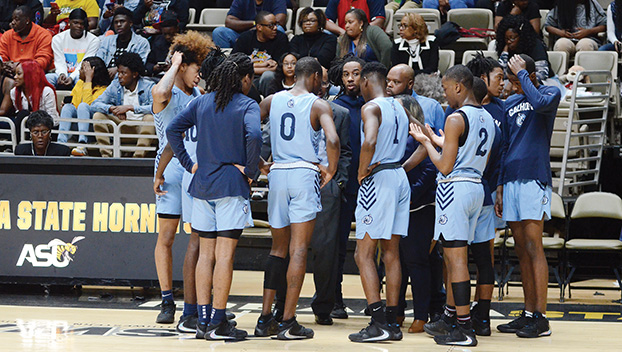 Calhoun head coach Ervin Starr talks to his team during a time out against Aliceville. | Photo by Adam Prestridge

In the Regional Championship last Wednesday, Feb. 19, the Tigers played Aliceville, a team that has played Calhoun in the last four AHSAA tournaments. The game was played in the Dunn-Oliver Acadome at Alabama State University.

Calhoun was down early 16-15 as Aliceville sank four three-pointers, while holding Calhoun to only two threes in the first period. That and also shooting 38 percent from the field hurt the Tigers as the team outside of star point guard JD Davison struggled to find the bottom of the net.

In the second period, the game was evenly matched as the score stayed at one apart as AHS led  30-29 at the half. Aliceville sank another two three-pointers and made the Tigers miss all attempts, but the Tigers free-throw attempts from the line helped tremendously as they shot 10-12.

Calhoun head coach Ervin Starr knew the same play could not continue in the second.

“The message stayed the same, we have been down at halftime multiple times this year and it is usually because we did not execute on offense, work to get our rebounds,” he said after the game. “Usually, if we can correct all that going into the second half usually it will work its way out and it did. We didn’t panic, we played a strong schedule this year just for moments like this.”

In the third, the Tigers came out hot and shot 50 percent from the field even though they went 0-3 from behind the arch. Aliceville could not stop the Tigers as they led the quarter by six, taking the lead 45-40. Calhoun as a team was able to steal the ball seven times, their outstanding effort on defense forced Aliceville to only shoot nine shots in the third, the lack of shots caused for the deficit.

As the fourth quarter played out, Aliceville could not find any way to close the gap and the final score read 59-54 as the final buzzer sounded. Neither team shot their best in the fourth quarter, but the Tigers still went 10-13 from the free throw line, as they finished 25-37 on the night. AHS went 12-21 in the game.

Davison had a standout game and refused to let his team fall short in the title game as he dropped 43 points only 11 off from matching Aliceville’s team total. He added 10 rebounds and shot 19-of-25 from the free throw line. Ladderen Mason added eight points and Demareus Cheatham scored six.

Media along with members of the AHSAA committee voted for players to be put onto the All-Regional team, Calhoun had two players be chosen, Ladarren Mason and Davison. Davison was also awarded with the Regional Most Valuable Player plaque.

A judge ruled during a preliminary hearing Monday morning that the case against William Chase Johnson in the shooting death... read more