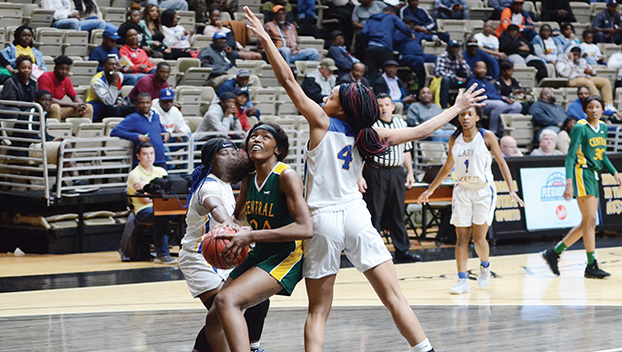 Class 2A Southwest Regional Tournament MVP Cordasia Harris comes down with a rebound for Central in the title game against Aliceville. | Photo by Adam Prestridge

Last season, the Lady Lions were handed a loss in the Elite 8 of the Alabama High School Athletic Association’s State Tournament by R.C. Hatch, a team that was looking for revenge. It was then progress from the previous season was born in Central.

Last Wednesday, Feb. 19, in the Elite 8, Central’s varsity girls faced off against Aliceville, a chance at bringing home the Regional title was on the table and the Lady Lions refused to let this opportunity go.

In the opening quarter, Central got out running, shooting 7-of-16 from the field and knocking down four three-pointers led to a 20-10 start. Aliceville failed to hit a three in the first and shot 3-of-15 from the court.

In the second quarter, much of the same struggles continued for AHS as the team failed to hit a three and shot just 33. Central Hayneville hit three more three-pointers, which helped keep them ahead and winning the quarter by one point. The halftime scoreboard read 37-26.

After halftime adjustments were made, Aliceville had a new fire lit under them, improving their shooting to
8-of-15 from the field despite going 0-4 from behind the arch. Using a speedy defense allowed AHS to stick around, forcing Central to also miss all attempts from deep in the third and shoot 7-of-18 and a disappointing 4-10 from the free throw line. The end of third score was tied up at 46.

In the fourth quarter, all efforts were left on the court as the score went back and forth and a late game foul out by Dericca McCall gave chance for a letdown for the Lady Lions. Despite this, they prospered and flexed their muscle as the final read 64-63 in favor of Central.

Cordasia Harris led the team with a double-double, 13 points and 13 rebounds. McCall was behind her with 15 points and five rebounds. Kadaijah Williams and Jalyiah Gordon scored 12, Tyjanna Patterson added 10 and Tyeshia Similton added two.

Central of Hayneville awarded two girls with All-Regional awards, McCall and Cordasia Harris. Cordasia Harris was also given a most valuable player plaque, after her outstanding performance thus far in the post-season.

The Lady Lions faced off against Cold Springs at the Legacy Arena in Birmingham. After battling in all four quarters, the Lady Lions could not find the spark needed to surpass the defending champs, losing 61-46. Head coach Thomas Terry spoke on how he feels on the season and success of his girls.

“We are proud of the way they fought back,” he concluded. “We got off to a really slow start, but I’m just glad that we showed up and could show people that we can compete. We improved off last season and that is something big to always take home. I just hope they can take a minute and enjoy that they got here.”