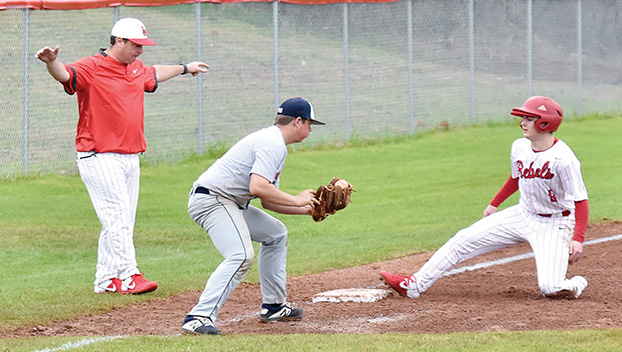 Lowndes Academy’s Landon Hooper slides safely into third base against Fort Dale to open the season. | Photo by Kathy Pickens

Back on Feb. 17, the Lady Rebels faced off against Fort Dale Academy at their home field. The varsity played first and came away with a win, 8-1. Afterwards, another win came for the junior varsity Lady Rebels, 11-3.

The Rebels also hosted Fort Dale at their home field, getting off on the right foot early, scoring five runs in the second inning. In the fourth inning, the Rebels added another three runs to the scoreboard to lead 8-1 at this point.

However, in the fifth inning, the Eagles fought back scoring five consecutive runs and making the game far closer, but the Rebels fought back once again scoring another four runs in the bottom of the sixth to push the lead back out.

At the end of the game, Lowndes Academy added another run as the final score was 16-10 in favor of the Rebels.

In the junior varsity game, the young Rebels also faced the Eagles. Early on, Lowndes got ahead by scoring one run in the first inning and then after allowing the Eagles to score three all in the third inning, added two more to even out the score.

Behind an intense finish, Smith, who went 1-2 with two bases off walks, was able to cross the plate in the fifth inning to put Lowndes on top 4-3 when the game ended.