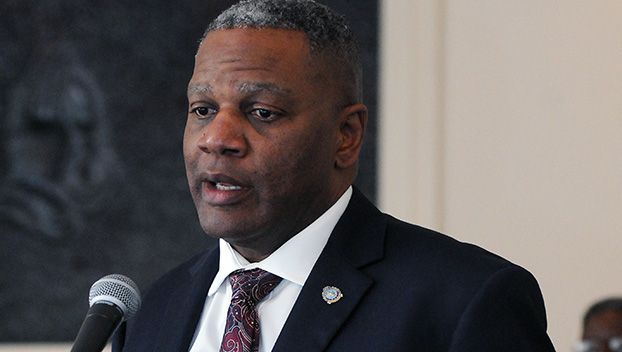 Christopher West speaks after being sworn in as Lowndes County Sheriff. | Photo by Mark Rogers

Newly appointed Lowndes County Sheriff Christopher West is on a mission to clean up the towns scattered throughout his rural county.

Earlier this month, West joined sheriffs from across the nation at the National Sheriffs’ Association Conference in Washington, D.C. During the trip, he also took the opportunity to speak with the elected officials that serve Lowndes County including Sen. Doug Jones and Rep. Terry Sewell.

During his conversations with the two politicians, West, who replaced longtime sheriff John “Big John” Williams who was gunned down and killed in Hayneville in November 2019, discussed the growing trend of violence against law enforcement.

However, West’s biggest topic was the drug crisis throughout his county and his idea for helping curb both sales and usage of illegal substances.

“The thing I brought to them from Lowndes County was the idea of a Workforce Initiative for our juniors and seniors at Calhoun and Central,” West explained. “What I found out is that a lot of these kids are involved in the drug trade. Most of them are not doing it because they want to, they are doing it because they don’t have a choice. Their families are extremely poor and poorly educated, their homes are dilapidated, they have no food and a lot of them don’t have lights or water oftentimes. The struggle is real among these families.”

“What I would like to do is see how we could initiate a co-op program for our juniors and seniors, so that maybe – if possible – we could find some grant funding, so we could get them out to the plants and get them back in school,” West said.

West added that the plan is in its infancy stages and would need additional support from not only Calhoun and Central officials, but also a partnership with a technical school, to aid in planning in order for the overall goal to be accomplish. Nevertheless, he said Sen. Jones and Rep. Sewell were “on board” in supporting the project.

“A majority of our kids don’t go to college, so we need to put some things in place to try to help prepare them, which also helps us in dealing with the drug distribution circle,” West said. “If we can help put money in their pockets, they won’t have to get money from the drug dealers.”

The goal would be to have the students that participate in the program fill open positions at the county’s Tier 1 plants following graduation.

“The objective is – because right now most of the people going to work for our Tier 1 plants, they go to work through a temp service – that these kids wouldn’t go through the temp service, they would go straight to work right after graduation at the plants,” West explained.

Prior to leaving for Washington, D.C., West and his team also began the first steps in replacing the John Hulett Correctional Facility’s current management system as well as the LCSO’s records management and Computer-Aided Dispatch (CAD).

“The system we are using now at the Sheriff’s Office was put in in 1999,” he said. “It’s a 20-year-old system, so we’re looking at upgrading that system to a more modernized system. We’ve had some vendors come in and show us some newer systems that are more up to date because the older ones are kind of like looking at DOS program – it’s that old.”

Since taking office, the support shown to West and the LCSO has been “great,” according to West.

“The County Commission is great and are supporting everything – they’ve been great,” he concluded.

Lowndes County Sheriff’s Office investigators joined with Sheriff Chris West on Monday at the county courthouse in Hayneville for a... read more