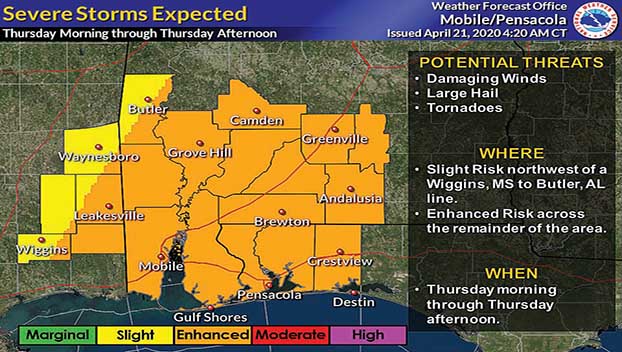 It also appears that Butler, Crenshaw and Lowndes counties will be in for more on Thursday.

“The way it’s looking we’ll have the right conditions for storms Thursday,” Butler County Sheriff Danny Bond, who is acting at EMA director, said. “We want to prepare and make people aware.”

“The severe weather risk on Thursday continues to increase, and the latest Day 3 outlook from the Storm Prediction Center has much of the area in an enhanced risk for severe storms,” Jones said in the email. “Areas north and west of a line from roughly Wiggins, Miss to Butler are in a slight risk. All modes of severe weather are possible, including large hail, damaging winds, and tornadoes (a few of which could be strong). The timing could start as early as the pre-dawn hours on Thursday morning and continue through the afternoon as a cold front slowly moves across the area, with the most likely time frame during the day on Thursday. In addition to the severe threat, locally heavy rain is also possible, especially across areas north and west of I-65. There will likely be adjustments to timing and threat areas as this event approaches, and we will continue to keep you updated on any changes.”

“Most of the damage was in the southern part of the county, but we had more than 100 trees down all over the county,” he said. “Several roads were closed and crews were still working this morning (Tuesday) to clear them. For the most part, all of the roads that were closed should be open by now.”

Bond said Butler County residents were fortunate that there were no injuries or deaths from the storms. Other areas of Alabama and neighboring Mississippi were hit hard with injuries and deaths. For the second Sunday in a row, areas of South Mississippi faced strong EF-4 tornadoes.

“We did have one home where a tree got the front porch and the homeowner’s vehicle,” Bond said. “If there was other major damage, we haven’t been made aware of it.”

Crews from Pioneer Electric Cooperative and Alabama Power Company worked to restore power, which was out to thousands of customers in Butler, Lowndes and Crenshaw counties. At one point Monday, more than 17,000 Alabama Power customers were still without power as crews worked to restore it. Several neighborhoods in the Hayneville area reported outages and more than 420 were without power in Butler County. Alabama Power was bringing in crews from other areas to assist in central Alabama.

“The first wave came through central Alabama on Sunday morning,” Jordan said.  “As a result, damage to Alabama Power’s infrastructure throughout Chilton, Coosa and Tallapoosa counties is extensive. Numerous broken and uprooted trees resulted in more than 150 broken utility poles and downed over 300 spans of wire. The weather, which followed throughout the day and into Sunday night, slowed efforts to safely evaluate and restore service to customers with some areas remaining inaccessible until this morning (Monday).”

“Damage reports included fallen trees as well, but infrastructure damage was not as severe and most of those customers have now had power restored,” Jordan concluded.  “A final wave arrived during the overnight hours, which caused considerable damage in southern Butler County.”

Gov. Kay Ivey on Tuesday announced her “Ribbons of Hope” campaign at a ceremony at the Alabama State Capitol. During... read more