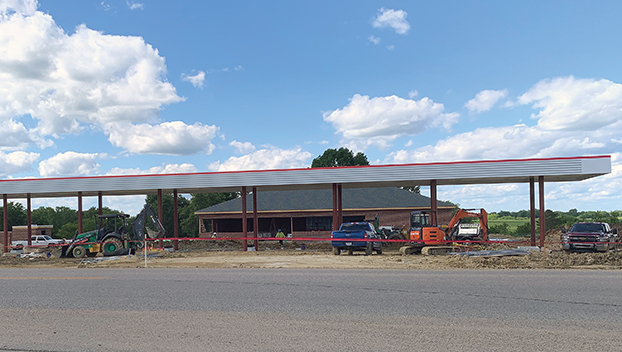 There is a lot of construction activity going on off Interstate 65 Exit 158 in northern Lowndes County.

Crews are busily putting up a new Speedway gas station/travel plaza at the exit that already has the Flying J, Love’s and Stuckey’s. During a recent meeting, the Lowndes County Commission approved the retail beer (off premises only) and retail table wine (off premises only) licenses for Tiffany Howell, owner of Speedway, LLC., 821 Tyson Road in Hope Hull.

The motion was made by District 4 Commissioner Joseph Bargainer and unanimously approved by the Commission. The opening is expected later this summer, for the project that has been in the works since last year.

“We still have a dump truck down that caught fire a couple of months ago,” Butts told the Commission. “We’re not sure when it will be resolved to get the truck back. Commissioner (Robert) Harris brought an idea of renting a truck to get that fourth truck. I’m in the process of talking about that to see what rates are. The insurance says that is a possibility.”

Butts said the part for the county’s boom cutter that was needed had been ordered.

“I assume it will be back up and running soon,” he said. “Right-of-way cutters are up at the industrial park and then they will move back around to County Road 6, 26, 32 and then to Commissioner (Dickson) Farrior’s district and then back to Commission Harris’ district.”

Butts also discussed the paving project on County Road 37 from Alabama 97 to U.S. 80.

“They have done the patching and leveling and started with the continuous paving last week,” Butts said.

Butts noted that recent rains slowed the project, but that it was moving along. The county’s crews were working on Waller Road in Commissioner Joshua Simmons’ district. The project was part of the Rebuild Alabama Act. Another project included leveling on County Road 32.

Butts also updated the Commission on emergency management, as he is EMA director.

“COVID-19 has been in the news for some time and I’ve been watching what they call the ‘surveillance dashboard,’” Butts said. “We’re No. 1 based on our numbers based on our population. We are continuing to monitor it.”