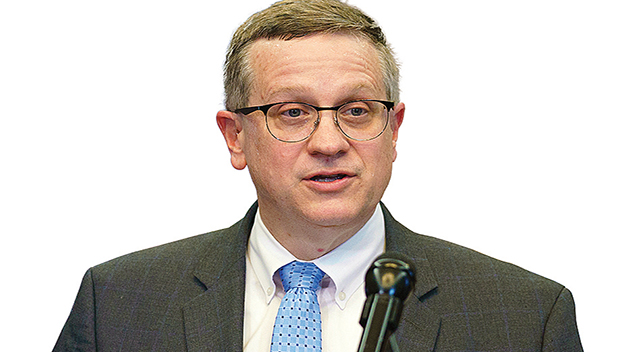 As the state’s chief medical officer, he’s seeing trends he doesn’t like as the state’s COVID-19 numbers continue to be at serious levels. For example, Butler County now has 24 deaths from the virus. Harris spoke last week about the issues facing Alabamians and urged the public to be cautious.

He cited crowds of beachgoers on Memorial Day as concerns in terms of the virus spreading.

“We are extraordinarily concerned about the numbers we have been seeing,” Harris said in a conference call last Thursday. “We know that the ADPH (Alabama Department of Public Health) and the partners we’re working with have increased the testing, but that doesn’t account for the case numbers that we’re seeing. It certainly doesn’t completely account for it. We know that we continue to have community transmission going on in many parts of the state. We certainly have identified many hotspots.”

Harris said officials were continuing to monitor things closely as the state reopened for business.

“Clearly there is a lot of disease transmission still going on,” Harris said. “We’re very concerned about that. As Alabama has opened up its economy, our message has really been trying more than ever to make sure that we can get people to understand the importance of doing the right thing.  Social distancing guidelines really are more important than they’ve ever been. When people were under a stay-at-home order, we preached about social distancing then. Now, more than ever, when they’re out in public, is the time they really need to follow those guidelines.”

Harris also urged people to stay six feet apart from people who aren’t members of their households. Harris also spoke about going into crowded areas whether indoors or outdoors.

“Face coverings or masks of some kind are imperative,” he said. “When I go out and I’m in a crowd of people, I do that. When I’m in meetings here in our department when we’re meeting with a group of people, I do that. Everybody needs to continue the same sanitation and hygiene things that we have been saying all along.”

Harris said many people have not taken the COVID-19 threat seriously.

“Those pictures on the beach were terrible,” he said. “We did not like that at all. I had conversations with local officials about that. They certainly recognize the dangers as well. They have done their best to use law enforcement to the extent they can. Ultimately, we need the public to accept this and to do this.”

Harris discussed the concept of community spread. He said wearing masks and taking precautions was not just about protecting yourself, but others.

“There are really good medical reasons for wearing masks,” Harris said. “I’m not sure everyone gets that. Maybe we didn’t do a good enough job early on talking about that. A mask is how you protect other people. A mask controls your own coughing or sneezing or just transmitting it because you’re talking. We know that a quarter of the people who are infected won’t have any symptoms at all.”

Harris also mentioned outbreaks in nursing facilities and said Butler County had been a part of one of the hotspots recently, along with facilities in Tuscaloosa and Elmore counties.

“Those are still attributable to community spread,” Harris said. “The people in the nursing home didn’t go out and get it – someone brought it in to them, presumably. There has to be transmission going on in the community for that to happen.”

Harris added that Alabamians need to do several things to contain the spread of COVID-19 in the state.

“We need to find a way for people to take seriously these social distancing guidelines,” he concluded. “We have worked so hard and tried to communicate so much. Ultimately, people make up their own minds and it’s unfortunate when they are hearing the wrong messages or mixed messages. We really need people to think about other people. It’s not just about yourself – it’s about those people that you care about.”

Two people were injured in a Sunday morning crash near Hayneville. According to reports, a three-vehicle accident occurred on Alabama... read more