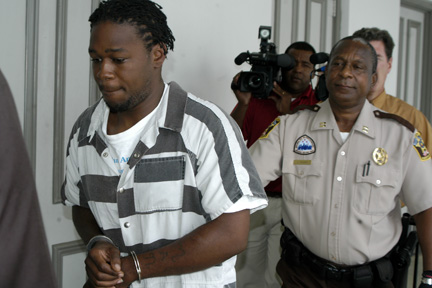 The Alabama Court of Criminal Appeals affirmed this week the conviction of a man convicted of six counts of capital murder during a robbery in 2012.

The evidence at trial revealed that on June 3, 2012, Terrye Moorer dropped off her 9-year-old twins with Girdner, their caregiver who was also Moorer’s friend from church.  That night, when Moorer drove to Girdner’s residence to pick up her children, it was dark and no one was home.  Moorer filed a police report and on June 5, 2012, the bodies of Girdner and the two children were found on a dirt road off of Alabama Highway 21 in Lowndes County.
Police developed Lee as a suspect based upon reports that he was seen driving Girdner’s white Mercedes on the day of the murders and the last call made to Girdner’s phone was from a number belonging to Lee’s mother.  Joe Hamilton, Lee’s cousin, testified that on June 3, Lee took Hamilton home in a white Mercedes that had a skateboard and a bag in the back.  Moorer testified that her children had similar items with them when she left them with Girdner.  Lee’s fingerprints were also found inside Girdner’s vehicle.

Additionally, testimony revealed that Lee told several people that he murdered Girdner, but not the children.

Finally, Curtis Robinson, who was incarcerated with Lee in Autauga County, testified that Lee “went there to commit burglary and it turned to something else.”  He added that Lee told him he shot and killed Girdner and the two children.

Lowndes County District Attorney Charlotte Tesmer’s office prosecuted this case and obtained a guilty verdict.  Lee was sentenced to life in prison without parole.  Lee subsequently sought to have his conviction reversed on appeal.

The Attorney General’s Criminal Appeals Division handled the case during the appeals process, arguing for the Alabama Court of Criminal Appeals to affirm Lee’s convictions. The Court did so in a decision issued Friday, September 4, 2020.

Attorney General Steve Marshall commended Assistant Attorney General John Davis for his successful work on this case and thanked the State Bureau of Investigation and District Attorney Charlotte Tesmer and her staff for their valuable assistance in defending the capital murder conviction.